What comes to mind at the mention of Liam Neeson are action movies. As with Neeson, all his movies come in different exciting plots, twists, and forms.

The climax, where he is keen on achieving his goal, usually features unbelievable events. As such, Neeson’s movies are regarded as one of the best in the action genre. Here are the 15 best movies by Liam Neeson.

Who Is Liam Neeson? Born in Northern Ireland on 7 June 1952, Liam Neeson is still strong and agile. For someone that age, he shows his stunts and fighting skills in his movies.  Liam started his career in 1976, appearing in a play, ‘The Risen People.’ He later gained recognition after his debut in ‘Excalibur’ in 1981.

Afterward, he acted in a few movies, including ‘ A woman of Substance,’ ‘Duet for one,’  ‘And the mission’ among others. His career gained much more popularity when he moved to Hollywood to act in movies like ‘Suspect,’ ‘Good mother,’ ‘And High Spirits.’

He got his first nomination after appearing in the holocaust movie ‘Schilinder.’ He has since made appearances in not less than 109 movies. He has been nominated for not less than 50 awards, of which he won about 25.

After his nomination for best actor in Academy Awards USA, BAFTA film award, and Felix, he finally won the category in AARP Movies for Grownups Awards. He won three BTVA voice acting awards and many more in different categories. The Queen awarded him an OBE award for his bravery in drama. And now, his net worth is about $145 million. During World War II, Oskar Schindler(Liam Neeson), a German industrialist living in Poland, decides to make the most of the war and earn as much as possible. To do this, he joins the Nazi Party and employs only Jews because they are cheap labor.

When he sees the way Jews are being treated in Poland, he takes it upon himself to protect his workers. According to critics, this movie accurately depicts the Holocaust and its events. You could start by watching the official trailer on YouTube. The official trailer on YouTube will surely warm your heart. To those who have watched the movie, Lesley Manville and Liam Neeson performed well in Ordinary Love, showing a normal couple’s life in a different, more heartwarming light.

Joan and Tom have been married for a while, going through life and their relationship easily. However, when Jane is diagnosed with breast cancer, they would have to find out how to cross that hurdle while trying to live as normal as they can. 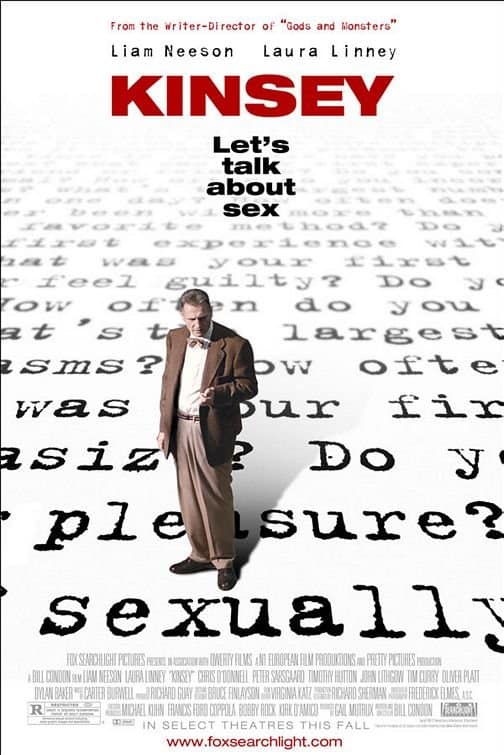 Get a glimpse of Liam Neeson’s talent from the official trailer. This is a biographical movie on Alfred Kinsey, one of the first scientists who researched Human Sexual behavior. He decides to explore this area of humans when he takes note that his students repeatedly came to him for sexual advice.

His book was one of the first recorded to have scientifically addressed sexual behavior in humans. To describe the words, critics use adventurous and clever, coupled with fine performances from Liam Neeson. Liam Neeson also features in superhero movies. Although he was not the protagonist in this movie, he still played an essential role as Batman’s mentor. After Batman has trained and learned from his mentor, he returns to the corrupt Gotham to rid the city of crime before it is too late.

In the official trailer, he’s shown as the motivation for Batman as he encourages and tutors him to be his best. Many people say this is the best of the Batman Trilogy. The movie star plays Payton Wilder in this movie, a brilliant but mentally unstable scientist who is out for revenge. After he had been left to burn alive by thugs hired by a crime boss, Wilder miraculously survives, but he wouldn’t let those who have harmed him live for long.

According to critics, it was unquestionably one of the best movies of the ’90s.  The official trailer, though old, contains old action at its best. A plane crashes in the middle of Alaska, leaving only 8 survivors, 7 refinery workers, and a hunter. John Ottway, the hunter, tries to lead the other survivor to safety, but it doesn’t prove easy because of the pack of wolves on their trail.

Critics commend the movie’s characterization and plot, calling it an incredible tale of survival. This movie is the kind that would have your heart beating fast as you expect the worst to happen anytime. See the official Trailer on YouTube just for a glimpse of how exhilarating the movie is. In a biographical movie about the man who led Ireland to rebel against Britain for their Independence in the early 20th century, Michael Collins led the Irish to fight for their independence against the Britains. However, when he sensed a win might not be possible, he decided to negotiate.

For this, he is deemed a traitor by his people. Critics say that this movie is truly remarkable as it depicts Michael Collins and all of his achievements in the light it is. Though released years ago, the official trailer on YouTube still gains more views from time to time. The movie star Alistair Little joined Ulster Volunteer Force (UVF) at the age of 17years. He was given his first mission to kill James Griffin, a 21-year-old Catholic, and executed in his home in Lurgan. Fortunately, he was executed in front of his brother Joe.

Now Alistair Little was sentenced to 12 years in prison for murder. He then later expresses his regrets while behind bars. 33years later, a TV station suddenly arranged a meeting for Little and Joe for reconciliation on air.

Joe, however, is full of revenge. So, what comes out of the meeting? Critics believe the tense atmosphere of the movie is what makes it interesting. Start with a few tense scenes in the official trailer. This is one of the most popular movies by Liam Neeson. The plot is based on the love of a father for his daughter. Also called 96 hours and the hostage, the storyline is about the daughter of an ex-agent who traffickers abducted.

Liam Neeson plays Bryan Mills, the protagonist of the movie, who assures the rescue of his daughter and her best friend. He has just 96 hours to rescue the girls. The official trailer shows several exciting action moments and violence. Blacklight’s official trailer features the movie of the struggle between Tavis block(Liam Neeson) and his CIA boss. Liam Nesson and the CIA boss met in the military and built a relationship. But Liam killed the boss while he raped a local. He works directly with the CIA boss, bringing to book rogue agents and helping those in trouble.

With time, he becomes quite popular with his job. However, he doubts the validity of the work he did for the boss when an agent he was asked to bring back was shot dead after threatening to expose the work he does for the boss.

He works with the journalist the deceased agent was trying to work with to expose the boss and also tries to get his family back after they’ve been put in witness protection, so he doesn’t find them. Reviews show the movie is a mystery movie that will keep you glued to your screen. Based on the novel “De Zaak Alzheimer’s” by Jef Geeraerts, and more like an upgrade of the Belgian crime thriller, “The Memory of a Killer.” The movie features Alex, a man who is good at his job despite his age; his experience and skills are precisely what make him good.

A formidable assassin better than all his opponents from the criminal organization, he refuses to work when a job contradicts his moral code to the FBI looking for him for obvious reasons. He does all these as he loses his memory hence the obvious reason for the movie title. The official trailer features a few of his mind-blowing scenes. In the official trailer, the phrase “never steal a man’s second chance” is used to present the life of Tom Carter( Liam Neeson), changing his crime-like ways to an honest life because of his new lover. However, he is double-crossed by two FBI agents, Neevens and Hall.

After a long crime life as the in-and-out bandit, Tom decides to surrender to the FBI while he also gives them all the money he has made from robbery.

Neevems and Hall, on the other hand, collide to steal the money rather than turn it in. They kill their boss and pin it on Tom. The movie centers on Tom trying to prove his innocence and save his love. The official trailer on YouTube will give you an insight into the life of an ex-convict who becomes a better man. The movie is based on a French novel by Victor Hugo. After a few years of escaping jail, Valjean (Liam Neeson) becomes a wealthy naval officer.

His encounter with one of the correctional officers in charge of his cell, Javert, changes his life forever. Fantine, a woman seeking to rescue her daughter, turns to prostitution to pay off her debts.

However, she is arrested by Javert but later released with the aid of Valjean. Together, Valjean and Fantine try to escape from Javert and rescue Cosette(Fantine’s daughter). After Fantine’s death, the mission becomes Valjean’s responsibility while he also fights to become a free man. The story is based on a true line of events in Russia. Although critics condemned screenwriting, the general performance and dramatic experience are top-notch. The official trailer shows the passion of navy officers and the pain of wives as they watch their husbands leave them.

The Russian Navy sets out to launch a ballistic missile, and they succeed. However, a turn of events happens when there is a fault that can cause the death of thousands of people and give rise to a World Power Clash.

While they work to stop the radiation, some officers die and refuse rescue offers. The k-19 crew worked together to prevent the explosion. Watch the movie to enjoy the historical sacrifices of these heroes. The suspense in the official trailer is enough to keep you hooked on the movie. In the film, Micheal (Liam Neeson) is faced with a choice to perform a task for a huge amount of money. He takes this money with no knowledge of what he is to do.

A great risk awaits him as he fights desperately not only for his life but also for a young girl, Sofia, who holds incriminating information and is the main target to kill. He strives to save all passengers on the train while he also has to be careful in discovering undercover criminals. An Air marshal tries to save a plane and all the passengers. After being threatened to pay $150 million, he receives a text on the plane to either pay the money or watch everyone get killed. The aircraft is hijacked, and every 20 minutes, one person is to be killed.

Everyone wonders how a person kills on a plane unnoticed. All efforts made to discover the villain on the aircraft are to no avail. The Marshall is set up with no means to escape or rescue the passengers. Will he survive? See the official trailer for a bit of this thrilling movie.

Liam Neeson is known for his incredible contribution to Hollywood when it comes to action movies. He is rated one of the best, and his movies are always blockbusters.

His character mainly relates to experience and skill, even though he’s on the brink of retirement. Seeing an older man move with the agility and strength of youth will thrill you and encourage you to achieve your goals.