Teen romcoms are all the range in the early to late 2000s, and She’s All That is no exception. With these twelve best movies like She’s All That, you can quench your thirst for cheesy romcoms in no time. If you are looking for some nostalgia for the early 2000s films, She’s All That can fill that up for you. With its cheesy plot and high-school setting, you will have a blast from the past when watching it. The movie’s humor, costume, and overall vibe scream the early 2000s.

She’s All That revolves around the journey of Zack Siler (Freddie Prinze Jr.) as he transforms one of the unattractive and nerdy girls in their high school.

After being publicly humiliated and dumped by his girlfriend, Zack must turn a girl to be as popular as his ex. With this mission, he only has one goal: to make Laney Boggs (Rachael Leigh Cook) the prom queen.

The film has many clichés you will encounter when dealing with teen rom-com movies. However, the story is still entertaining enough for most audiences. If you can get enough of the cheesiness of romcom, we have more films you can check out. After being cheated on while in a live stream, the famous TikTok star Padgett Sawyer is on a quest to turn the aloof outcast Cameron Kweller into the prom king. As the two start to bond and open up to each other, their romantic feelings also grow.

The film has mixed responses since its release. Some love the ideas yet find the acting and cast underwhelming. However, many young teens also grapple with the story with the social media star casts. One of the classics when it comes to transformations, Pretty in Pink, revolves around the struggle of Andie as she chooses between her childhood friend and the rich and famous new guy in town. The 1986 film is directed by Howard Deutch and stars The Breakfast Club actress Molly Ringwald.

The film is one of the pioneers in the ugly duckling transformation. In Pretty in Pink, Andie started as an outcast girl but suddenly found herself beginning to open up and improve. In her self-discovery, she caught the attention of the new rich guy, Blane.

Pretty in Pink cemented itself as a high school rom-com genre staple. With its positive reviews and critical acclaim, the film is one of the romance classics of the 80s romance films. Another teen-drama classic, who will not remember the iconic role of Anne Hathaway as the nerdy Mia Thermopolis? The Princess Diaries is a high-school twist to the Cinderella-like story. This film is a perfect must-watch if you want another flick encapsulating the early 2000s.

The film follows Mia Thermopolis as she lives an everyday life as a high school girl with her best friends, Lilly and Michael. After her grandmother is suddenly in her life, Mia’s life flipped upside down. It seems that she might be a princess from Genovia.

The Princess Diaries is a perfect mix of romance, comedy, and drama. The film gained popularity since its release with an absurd premise yet relatable characters. The film is a classic from the 2000s, with nice emotional beats and a not-so-convoluted plot. The film follows Samantha Montgomery as she manages the life of being an orphan and is exploited by her stepmother.

Sam lived a simple life until her parents died, leaving her to the care of her mean stepmother and stepsisters. In the middle of her family problems, she discovered that her e-mail relationship was with the most popular boy in her school.

Rather than having a glass slipper, Austin might search for his Cinderella through a phone. If you are in for a cheesy, fun film, then A Cinderella Story is perfect. It’s a pretty great film with fun jokes and brilliant casts throughout. Even if you haven’t watched Grease, you might have heard some of the classic soundtracks from the movie, such as, ‘Hopelessly Devoted to You’ and ‘You’re the One That I Want. The film is a certified teenage flick classic. It’s cheesy and hopeful yet filled with romance and longing for love.

The film revolves around the tangles and twists with the love story of Sandy Olsson (Olivia Newton-John) and Danny Zuko (John Travolta). Set in the 1950s, the two deliver many songs and dances detailing their journey towards self-acceptance and loving each other.

The film is viral among critics and audiences alike. With a budget of $6 million, it has a gross box office of almost $400 million, making it a box-office success. With its fun song and dance sequences, catchy songs, and charismatic casts, Grease is another stamp in the pop-culture sphere. Never Been Kissed combines high school’s youthful scene with adult life’s struggles. The film follows the makeover of the nerdy twenty-five-year-old Josie Gellar to fit in with the high school students for her editorial assignment. With her brother Rob’s help, Josie can be the popular girl in her second shot in high school.

As an undercover, Josie finds herself attracted o the handsome young teacher Sam. With her mission in jeopardy, she can’t let her feelings get in the way. As a perfectionist, can Josie let her feelings be at the forefront of her life?

The film is a fun flick with a charming cast such as Drew Barrymore and David Arquette. It has many funny jokes and gags that will make you laugh. 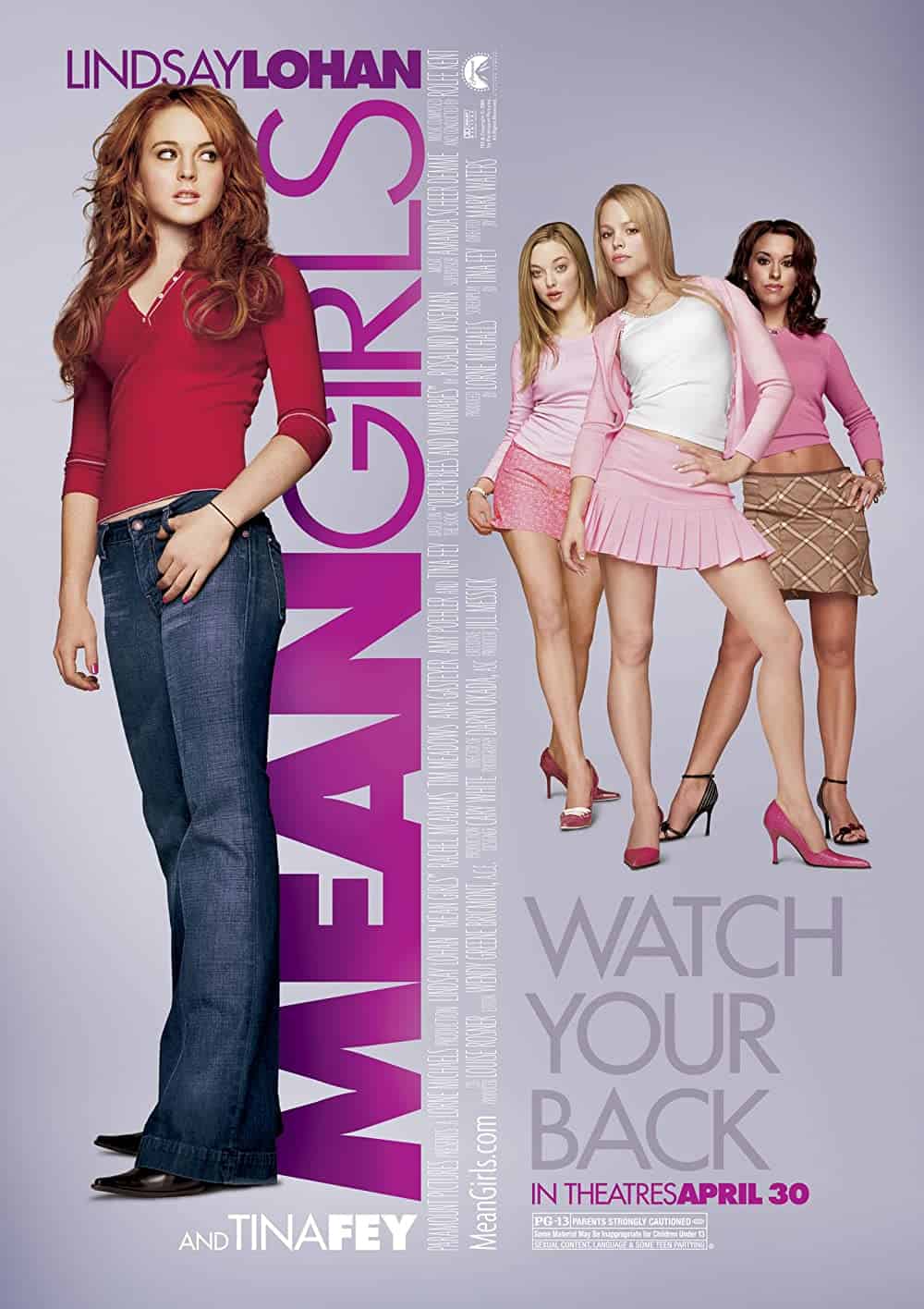 One of the most iconic early 2000s films, you are in for a nostalgic ride with Mean Girls. Starring Lindsey Lohan and Rachel Mc Adams, the film cemented itself as one of the most influential films in the teenage drama genre.

The film follows the makeover of the naïve Cady Heron as she tackles the life of being a high school girl. As she was homeschooled due to her parents’ job in Africa, Cady has many things to learn to survive the cruel world of female teenagerhood.

With her good looks, Cady is invited by the A-list clique in their school, also known as ‘The Plastics.’

Mean Girls is a funny movie that takes some of its absurdist humor to the confines of high school. If you have never watched this classic, then here is your sign. Ditzy and clueless, that’s how the world sees Cher Horowitz (Alicia Silverstone), especially in the eyes of her ex-stepbrother, Josh (Paul Rudd).

With the appearance of a new student Tai Frasier (Brittany Murphy), Cher shows her ingenuity and wit regarding popularity and fashion. With a new girl at hand, Cher giver herself a mission to turn Tai into a popular kid like her.

Clueless is ripe with absurdist humor and funny gags. If you love other films such as Mean Girls and She’s All That, you will love this film. Despite its primary focus on comedy and teenage life, the romance in the movie is not forgotten.

The film is well-loved by many and will trigger some nostalgia for the mid-90s fashion. It’s a fun teenage flick to pass your time and unwind. Heathers must be one of the most influential teenage movies of all time. Despite its lackluster performance in its release, Heathers is an inspiration for other films such as Mean Girls and Jawbreaker. Many of our beloved cliches can be derived from the movie.

The film revolves around Veronica Sawyer (Winona Rider) as she joins the famous group in their high school called ‘The Heathers.’ With her involvement in the group, Veronica finds herself entangled with a series of deaths that she directly or indirectly causes. At the top of the chaos, there is only one guy behind it all: J.D. (Christian Slater).

Heathers is one of those movies that are ahead of its time. It bombed at the box office due to its dark and edgy humor, often bordering on ridiculousness. However, the film garners a modern cult following, especially with the help of its musical production. A dark comedy film, Jawbreaker is akin to the humor of the old teen flick classics such as Heathers.

It revolves around the death of Elizabeth Purr (Charlotte Ayanna) due to the prank gone wrong by her so-called best friends. Fern Mayo (Judy Greer), a social outcast, finds herself at the forefront of the incident after she is tasked to deliver Elizabeth’s assignments.

To appease Fern and keep her mouth shut, the suspects of the murder give her a makeover. With the sudden transformation, Fern finds herself at the top of the social hierarchy. With murder going on in the background, can she have a regular high school life after this?

Unlike other teen flicks, Jawbreaker is not scared to lean on the absurd nature of the film. It utilizes dark humor to keep the story engaging and fresh with the audience, garnering a cult following since its release. The sixteenth birthday for a woman is mostly a particular time. It signifies their journey into late teenagerhood and opens their minds as young women. However, none of that happened on Samantha’s sixteenth birthday.

As her sixteenth birthday goes on, she finds out her family forgot to celebrate due to her sister’s wedding the next day. Distraught, Sam continues the day pining over her crush Jake. Chaos and parties happen, and at the end of it, Sam finds herself ready to confess her feelings toward Jake.

Being written by John Hughes and starring Molly Ringwald, the film is a certified 80s classic. It’s filled with many nostalgia-inducing visuals and gags that will make you reminisce about the old days, whether or not you are present in the 80s. If you want a fun film about womanhood and being a teenager, this film is an excellent choice. Anastasia, a film by the Fox Animation Studio, has the same plot of makeover and romance without the teenager drama with She’s All That. If you want a fantastical film based on the Romanov family, you ought to watch this animated film. It’s magical, with exquisite animation and gorgeous visuals.

The film revolves around the downtrodden Anya, an orphan without a family. Two con men, Dimitri and Vladimir, want to use her likeness to trick the Dowager Empress into thinking she is the lost princess.

However, it’s more work than the two men expected as Anya is not the most ladylike. Dimitri and Anya’s bond began to develop in their journey, leading to complex feelings and harrowing secrets.

The film is well-loved and has had a cult following since its release. The feature-length animated classic is one of the most well-known historically-inspired movies of the late 90s.

Based on this list of twelve best movies, like She’s All That, many films undergo the trope of teenage rom-com flicks. With the rise of early 2000s nostalgia, this must be the best time to binge on these old and new movies that capture the same essence of She’s All That.