Watching movies with your teens can be a great bonding experience. But, sometimes, choosing entertaining yet age-appropriate films can be pretty challenging. We understand your dilemma since there are raunchy films that are not for kids. So, we’ve gathered the13 best PG-13 comedy movies you can watch with your older children.

We’ve asked other parents for their approval of these funny films. They gave us the go-signal to see these movies with our teens. We also checked out movie forums, parenting websites, and reliable reviews to create a list. So, it’s time to schedule a movie night with the newest member of the PG-13 gang. This comedy follows the life of Sasha and Marcus. Everyone thought that they would end up together. However, Sasha pursued a culinary career and left the comforts of their hometown. Meanwhile, Marcus stayed behind and slacked throughout his adult life. Will there be a rekindled romance when Sasha goes back home?

This movie is a funny take on the thin line between friendship and romance. With stand-up comedian Ali Wong at the helm, expect no less than comedic gold. She and Randall Park have superb chemistry. It’s as if you’ve known them all your life. If you grew up watching WWE, you’d enjoy watching this film with your teens. It’s based on the real-life story of a family who wrestles in small, unknown venues. Challenges cropped up when only one of the kids got the chance to go pro. This equally heartwarming and funny film is great for movie nights. The kids can learn a lot about the importance of family while having fun.

The Rock’s presence lights up the screen as usual. His witty remarks and comedic timing are always on point. The storyline is something we haven’t seen before. It’s a refreshing take on how to reach for your dreams. 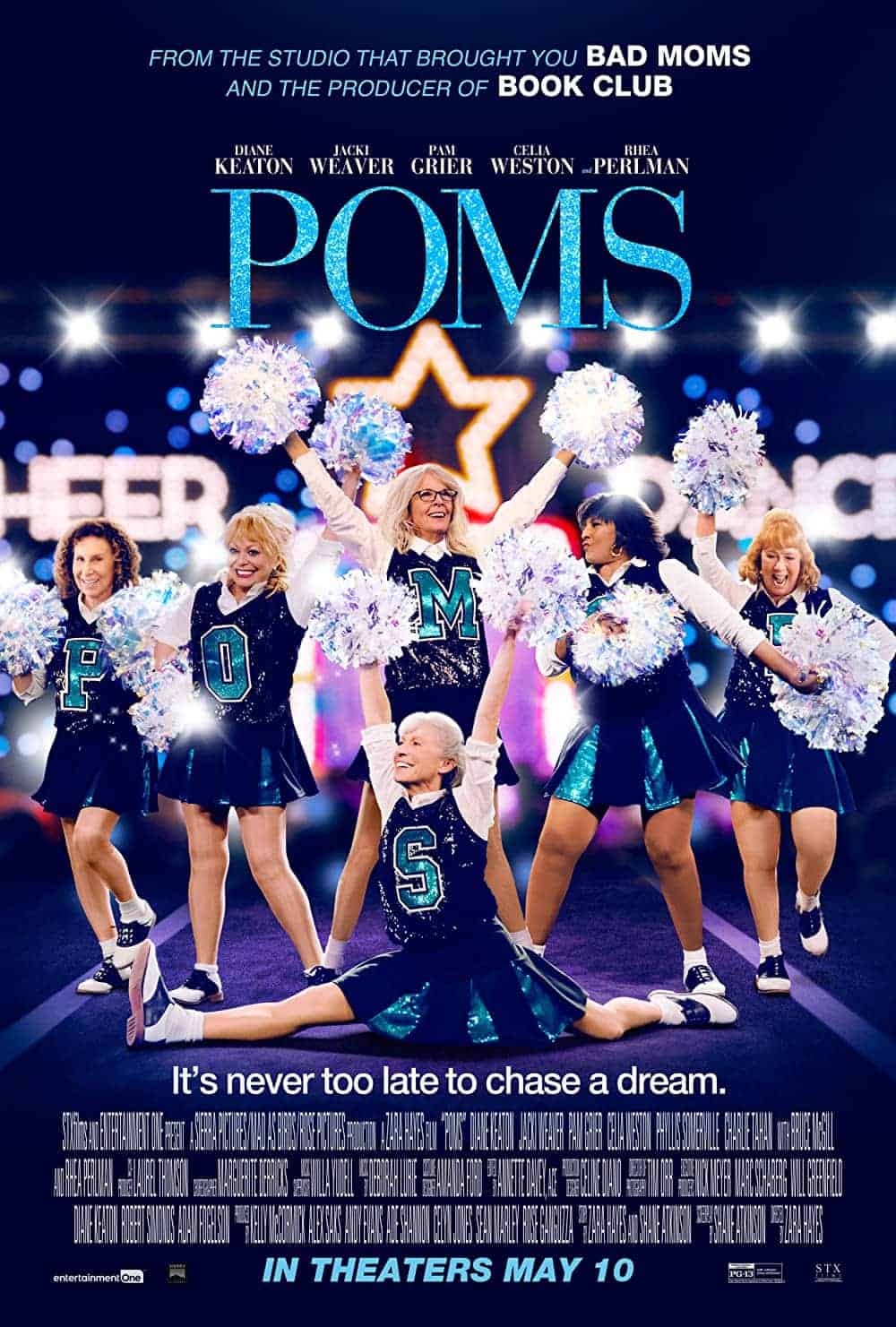 This film is an inspiring comedy about a group of women in a retirement home. One of the newest residents wanted to fulfil her dreams of being a cheerleader. What follows is a hilarious tale of trying one’s best despite body aches and pains.

As always, as the lead, Diane Keaton was in her element. The rest of the cast stayed true to their characters until the end. It was consistently funny all the way. Some scenes will tug at your heartstrings. It elicits a roller coaster of emotions, making it worth your time. There’s a big chance that a Will Ferrell movie is funny- and Eurovision did not disappoint. However, unlike his other films, this one has more depth. It introduced the world to the Eurovision contest and its exciting story. Some viewers said they expected a silly movie but enjoyed it immensely.

It had the perfect Eurovision casting. There’s a Russian guy, weird backup dancers, spot-on accents and entertaining songs. The music was surprisingly catchy, so you’d find yourself looking up the soundtrack after. The creators showcased the contest but were able to inject tons of hilarious moments. Fans of this movie can’t believe no one has cast Kristin Stewart in a comedy. We all know her as Bella from the Twighlight saga. However, she was a revelation in this movie. The film had the perfect combination of chaotic scenes and rib-tickling moments. Then, you add Schitt’s Creek’s Dan Levy into the mix.

Do you want to know the result? You’ll get a heartwarming film relatable to anyone with a secret. Add this to your best Christmas movies list. Plus points if you like light LGBTQ movies. It’s an eye-opener that will make you smile as well. Be prepared to smile so hard during and after watching this film. After the Will Ferrell-Mark Wahlberg movie, The Other Guys, comes another comedy gem. However, this one is relatable to parents and kids alike. It dives into step-parenthood and family life in general. It’s not easy to raise kids, especially not your own.

There are some adorably absurd moments. Remember, it’s not a Ferrell movie if there’s no great physical comedy. The soundtrack is terrific and fits the narrative perfectly. The stark contrast between the characters is amusing. You’ll find yourself taking and changing sides throughout the movie. Movies that center on family life can melt your heart. However, when it’s a comedy, it makes viewing better. Instant Family is about a husband and wife who fostered three siblings without prior experience. It lets you in on the challenging world of the foster care system.

It is a serious topic. However, the makers injected a lot of funny moments to make it light and heartwarming. The kids gave impressive performances and matched the adults’ energies. Watching a typical sensitive topic made into a light comedy is refreshing. Movie fans dubbed this movie as one of the best of its time. Adam Sandler and Drew Barrymore had unbelievable chemistry in The Wedding Singer. So, the producers decide to give the duo another chance. Luckily, they were right. It’s a funny film with a storyline that’s never been done before. Sandler’s brand of slapstick comedy was still there.

However, he showed some heart in this film. Drew Barrymore is charming, as always. This romcom will make you fall in love with life. The Hawaii backdrop and the fabulous music created a feast for the senses. It’s the kind of movie you’d watch over and over again. This movie can entertain anyone across all generations. So, it’s a film that you can enjoy with your teens. The creators chose the best music, putting the song Titanium on the map. Acappella groups are not popular in mainstream entertainment. However, the Barden Bellas made it cool and awesome.

Rebel Wilson did not hold off with the comedy. She was so funny throughout, spewing hilarious, quotable quotes. Many fans revealed to have watched this many times, and there’s a big chance you would, too. It’s movie marathon material, so prepare the snacks and cozy up on the couch. Incredible movies deserve a sequel- and that’s why there’s Pitch Perfect 2! The Barden Bellas are back again to join an international competition. However, they had an awful start. A blunder at the beginning snowballed into hilarious complications.

As usual, Rebel Wilson was funny, even without trying. Hailee Steinfeld’s addition to the roster made it more entertaining. All the songs are sing-along worthy, so prepare to rock it out after. You’ll also marvel at some parts of Europe. These elements make it one satisfying watch. For sure, your kids and you will have a blast. Reese Witherspoon made Elle Woods into a movie icon. Who doesn’t know about the quirky, living Barbie who got into Harvard Law? The storyline may be improbable in real life. However, the story of staying true to yourself is a universal truth.

There are so many meme-worthy scenes in this movie. You’ll laugh and cry with Elle. You’ll cheer her on when it seems no one cares for her. The color pink will have a new, powerful meaning after you’ve watched this movie. It’s girl power all the way. But invite the teen boys in the house. Indeed, they’ll learn a lesson or two. A comedy movie list won’t be complete without a Jack Black film. It was in theatres almost 20 years ago, but it is still charming in our hearts. Today’s teens can enjoy it with their families thanks to streaming services. It follows the story of Dewey Finn- a slacker who needs to keep his life together.

He’s on the brink of being homeless. So, he accepted a job as a substitute teacher by faking his identity. Then, he started a rock band with his high-achieving students. It’s a beautiful, funny film that everyone in the family will love. Who would have thought Robert de Niro would be amazing in a comedy? We all know him as the star of many serious films. However, his role in Meet the Fockers showed that he could make us laugh, too.

His banters and sarcastic remarks directed at Greg Focker (Ben Stiller) will have you in stitches. Two decades have passed. Yet, this film never fails to entertain the young and old alike. So, if you’re looking for a relaxing night, this movie is for you.

There’s something special about sharing a funny movie with your loved ones, especially your kids. Now that they’ve entered into teen hood, there are more options for family movie night. We hope this article’s 13 best PG-13 movies will start a wonderful tradition.